The "title" of the thread is the ratio of weight / length of the yarn. (m/g)

The bigger the "title" the finer and stronger is the yarn. (The title 200/2 is a yarn made of two threads with title 100/1 twisted together). The smaller the title the bigger the threat is.
This is the reason why the oxford fabrics have a low title. 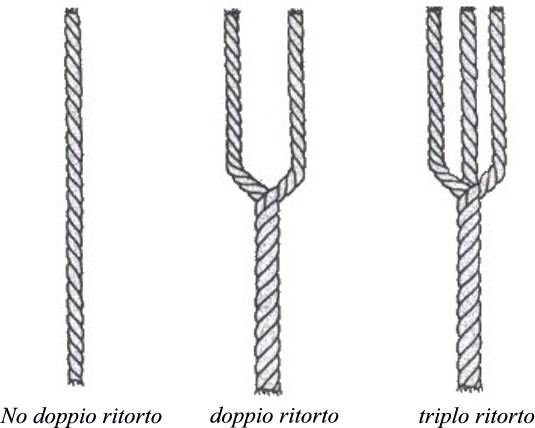 Fabrics assume names that are related to the threads and yarns used :

Batavia (twill): A fabric that has a twill effect predominantly on one side but a plain effect on the other, giving an armoured effect.

Batista: Very light and transparent plain weave fabric. Its name is attributed from that of Jean Baptiste, an ancient French weaver from Cambrai (or Chambray) who is purported to have woven the first version of this fabric, however this is unsubstantiated. Others maintain that the name Batiste originated from another fine fabric woven in India called "Baftas". The original fabric would in any case have been woven in a fine linen, warp or weft, but generally today the term is used for cotton fabrics.

Brillantine: A poplin based fabric with small figured effects. The name Dobby comes from the English Dobby looms that traditionally produced these fabrics in the past.

Flanella: A flannel woven from wool, or a wool/cotton mix (also a term applied to some 100% cotton fabrics with a wooly aspect). It has a directional pile achieved by brushing that makes the fabric very soft to the touch, and also warm. Flannels are often used for clothes that have direct contact with the skin, such as shirts, suits, trousers and ladies wear.

Gabardine: A very compact fabric usually woven in a 4 shaft twill or herringbone and traditionally used for raincoats. Since they are dense they are quite weatherproof. Usually the twill effect of the typical gabardine is on the face side. Gabardines are also sometimes used for trousers and for heavyweight sporty shirts and can be emerised to feel softer to the touch.

Giro Inglese: An openwork fabric with a particular contraction where the warp and warp threads move around and across each other to produce open work effects that resemble knitted fabrics. A light and airy fabric ideally suited for summer and refined leisure shirts and jackets.

Oxford: The name of this fabric is taken from the English collegiate City of Oxford where it was worn by the students for leisure wear as generally considered to be a bit more sporty, less formal than Poplin or Zephyr. Its characteristic structure is a warp (usually coloured) that is much finer than the weft which is thicker and traditionally white, producing a chalky white characteristic melange effect.

Panama: This fabric, generally in wool or cotton, is a derivitive of plain weave, but instead two warp threads (ends) of warp are crossed with two weft threads (picks). It is also called a Matt weave, and the name derives from its appearance that resembles the weave of the traditional straw Panama hat.

Piquet: Cotton double faced cloth which presents different relief effects similar to the weaves seen on silk tie fabrics, or in any case combinations of different types of weaves within the same fabric. The fabric is usually very richly constructed in order to achieve the raised weaving effects, whether they are satins, ottomans or vertical or horizontal ribs. The fabric is woven on top and bottom beams to keep the good tension. Other typical piquet constructions are the Bedford Cord or wavy Marcella effects often associated with formal evening wear fabrics.

Plissé: This fabric is woven in a particular way to achieve a fine pleated sort of effect that is used for formal dress shirts. Some Plisse fabrics may be chemically treated by caustic soda to produce a pleated effect, like the typical pleated fabrics of Fortuny.

Popeline: This name refers to a fabric derived from "papalina" with reference to the Papal City of Avignon from where it originated. The number of weft picks is only half the number of warp ends. This particularity permits the coloured stripes to be clear and bright, in comparison with the much softer weft checks. In fact it primarily became important since the 1960's owing to the greater loom speeds that could be achieved on account of the lesser number of weft yarns, in comparison with the gingham or zephyrs of the past.

Voile: A very light fabric in plain weave which is used both for fashion and furnishing fabrics. The transparent effect is achieved because the yarn is extremely tightly twisted and therefore the resultant woven fabrics are very airy and open.

Zephir: This was a term invented by the company David & John Anderson towards the end of the 19th Century. David Anderson was trying to define a much finer quality of fabric than the typical and fairly ordinary term " gingham" and the term he chose was Zephyr, the name of a very light and gentle wind. The name has become an internationally recognised description of a lightweight gingham fabric whose number of warp ends are similar to the weft picks giving a very even check appearance. It can be noted in our archives the large number of Zephyr design volumes from the late 19th Century.

"Linum usatissimum" is the botanical name of the plant from which we get the fiber. It is considered the world's oldest plant fiber.

Linen becomes most common in Europe in the middle Ages. Not even the introduction of the cotton by the Arabs, around 1300, reduced its importance. Only in the 18th century, with the invention of the first spinning machines and the development of industrial production in North America, cotton became a mass product and its use prevailed over that of Linen.